Rainbow families: this year, Slovenia became the 14th EU Member State to allow same-sex couples to marry and adopt. However, obstacles to full equality remain in other EU countries. How should the EU act to further the fundamental right of its LGBTQIA+ citizens to marry and start a family?

Committee on Civil Liberties, Justice and Home Affairs I

Chaired by Alice Maffoni (IT)

Sara was born in Spain to a lesbian couple. Her parents were of Bulgarian and Gibraltarian origins. Their dream was to live a normal family life, but they had to fight for it. Once Sara was born, her parents, to not leave their child stateless, decided to move back to Bulgaria since Spain doesn’t grant citizenship to those who don’t come from Spanish descendants and because Gibraltar doesn’t allow the transfer of citizenship. They couldn’t have imagined what was waiting for them. Bulgarian authorities didn’t acknowledge Sara’s birth certificate because the state doesn’t recognize same-sex legal parenthood. A child was almost left stateless, with no identity documents recognised.

An opposite-sex couple wouldn’t have needed the intervention of the Court of Justice, whose judgment was in favour of same-sex parenthood, to be parents of their child, but the widespread sex-based discrimination among some Member States still requires the intervention of a superior body to make civil rights be respected.

The European Convention of Human Rights (ECHR) safeguard the right to marry and to found a family for all EU citizens. However, the lack of legal recognition of same-sex parenthood in the EU Member States, other than being a discriminatory absence itself, lead same-sex couples to face great difficulties concerning the legal representation of their children in fields such as healthcare, education or travelling abroad.

The EU lacks authority to recognise someone’s marital or family status therefore national laws in this area may differ: only 21 out of 27 EU countries provide a legal framework for same-sex couples. Some Member States permit same-sex couples to get married, some allow alternative forms of registration, such as civil unions, and others don’t give same-sex couples any kind of legal status. Even if there have been great steps forward since the Netherlands for the first time in 2001, legalized same-sex marriages, rainbow families are still struggling to get the recognition they deserve. The Court of Justice of the European Union (CJEU) recognises the civil rights of same-sex couples and the European Court of Human Rights (ECtHR) rules that marriages performed in one EU country must be recognised by another EU country. However, same-sex parenthood hasn’t been acknowledged. Methods to achieve parenthood for same-sex couples, such as medical-assisted procreation (MAP) and adoption, are bound to the Member States’ legislation.

The EU has been tackling said issues for a long time now and the fight still isn’t over: on Wednesday 23 November 2022, the proposal to recognize common laws for same-sex parenthood has been one of the main topics discussed by the Members of the European Parliament1 and the European Commission presented a proposal on this matter a few days later.

As Mario Furore, member of the European Parliament, said: “we cannot allow for citizens to be discriminated against”.

1Members of the European Parliament pushed the European Commission to craft a proposal to enshrine the cross-border rights of ‘rainbow families” in to EU law. 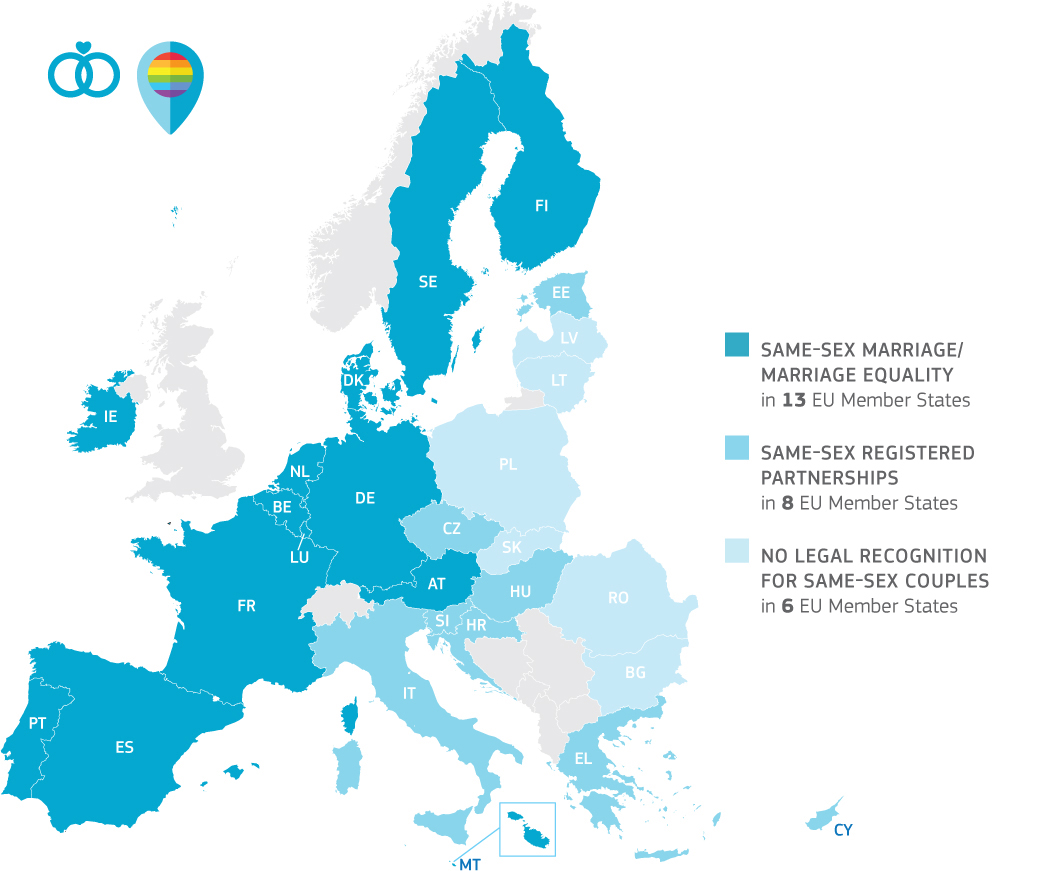 The European Commission along with the European Parliament  and the Court of Justice have both affirmed their will to align opposite-sex and same-sex couples in terms of civil rights. However, the EU’s scope on this matter is narrower considering that EU Member States are in charge of the civil rights granted to their citizens. Furthermore, each country organises access to MAP and adoption: parenthood is bound to the Member States’ legislation. This can be different from country to country.

Multiple activist organisations that promote same-sex couples’ rights, such as the International Lesbian, Gay, Bisexual, Trans and Intersex Association (ILGA) and the European Network of Equality Bodies (Equinet). This network was established to encourage a consistent application of EU law in the areas of non-discrimination and equal treatment, 46 organisations from 34 different European nations, including all EU members, are part of the network.

There have been various steps forward for same-sex marriages and parenthood possibilities in the EU. Today marriage equality is safeguarded in 14 Member States. The Free Movement Directive of 2004, established by the European Commission, allows all spouses, including the ones of rainbow families, to freely move between the EU Member States, even if the new host country doesn’t recognize same-sex marriages. Furthermore, multiple rulings of the CJEU represent landmarks regarding this area. For instance, in 2008 the CJEU during the Camon and Hamilton Case2 in Romania, stated that each part in a same-sex marriage must enjoy the same freedom as a spouse of heterosexual marriage, defining the word spouse for the first time as gender neutral and making it clear that same-sex spouses must be granted residence rights within the EU Member States. After this case and the ECtHR ruling, the European Parliament in 2021 passed a resolution to ensure that the sentence established by the Court of Justice is respected among the Member States, however, this goal still hasn’t been achieved.

Moreover, when adoption is available to single parents, the ECtHR determined that LGBTI people cannot be discriminated against.

For what concerns the recognition of birth certificates of same-sex couples’ children, the CJEU rules that birth certificates issued in a Member State must be recognised throughout the EU and, moreover, the European Commision proposed, on Wednesday 7 December 2022, a new rule with the aim of ensuring that rainbow parents recognised in one country, are recognised as parents in all the EU Member States protecting their movements throughout the EU. 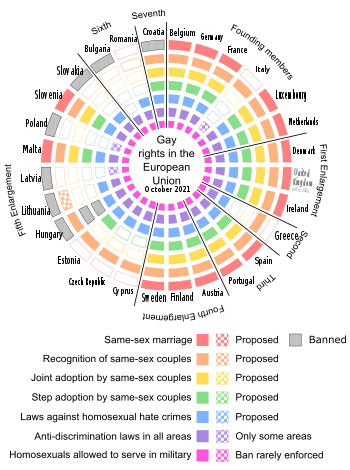 2Clai Hamilton, spouse of Romanian citizen Adrian Coman, has not been granted residency even after the CJEU recognised the freedom of movement of spouses.

The EU does have its own position regarding same-sex couples’ rights to marry and parenthood, however, there are multiple challenges that have to be overcome.

The European Court on Human Rights (ECtHR) doesn’t require the Member States to be open to same-sex couples marriage but only to provide them with legal recognition if they have been married in another Member State. However, this ruling isn’t always respected in practice3 and the diverse legislation within the European Union regarding the matter of same-sex couples’ rights makes it hard for those involved to freely move across the Member States.

LGBTQ+ support is still uneven among the EU Member States: 9 countries prohibit adoption for same-sex couples claiming that growing up with two parents of the same sex can expose children to a difficult life despite studies showing that said children grow up just as well as children with opposite-sex parents. The countries where same-sex partnerships, not marriages, are recognised allow second child adoption4 but not the adoption of a child de novo5. Moreover, when this last adoption practice is allowed, it’s mainly an international process which requires two conditions that are hardly ever found combined: firstly the applicant’s country has to allow same-sex couples to adopt as well as the country of the child that’s going to be adopted. And as stated before, many Member States allow only one partner to adopt6, making the whole process really fragile considering the child would be legally bound to only one parent.

Finally, despite the existing regulations of the European Union itself and the Court of Justice, there have been some struggles to get the Member States to behave following such directives. The EU doesn’t hold the power to actively change legislation regarding civil rights in its Member States and this lack of authority has already led to sex-based discrimination events where countries such as Romania weren’t following the general anti-discrimination EU legal framework.

3 Case of Romania
4 Adopting the partner’s child
5 A child who has never had any legal paternal connection to neither of the members of the couple
6  The ECtHR ruled that when the country allows a one parent to adopt, same-sex couples must not be discriminated

Equality is one of the main values of the European Union. The LGBTQ+ community has been safeguarded from multiple aspects, but the work done is not enough. Despite Member States such as Sweden providing rainbow families with the same rights as opposite-sex couples, in countries such as Italy or Bulgaria same-sex parents are barely recognised.  Many questions and issues are still to be answered.

Noting that same-sex couples are still being denied certain civil rights in the Member States, how can the EU make progress in this area?

In which way should the EU make its rulings be respected by every Member State?

Which actor could facilitate the adoption process for same-sex couples?

How should the EU and the involved actors counteract sex-based discrimination?