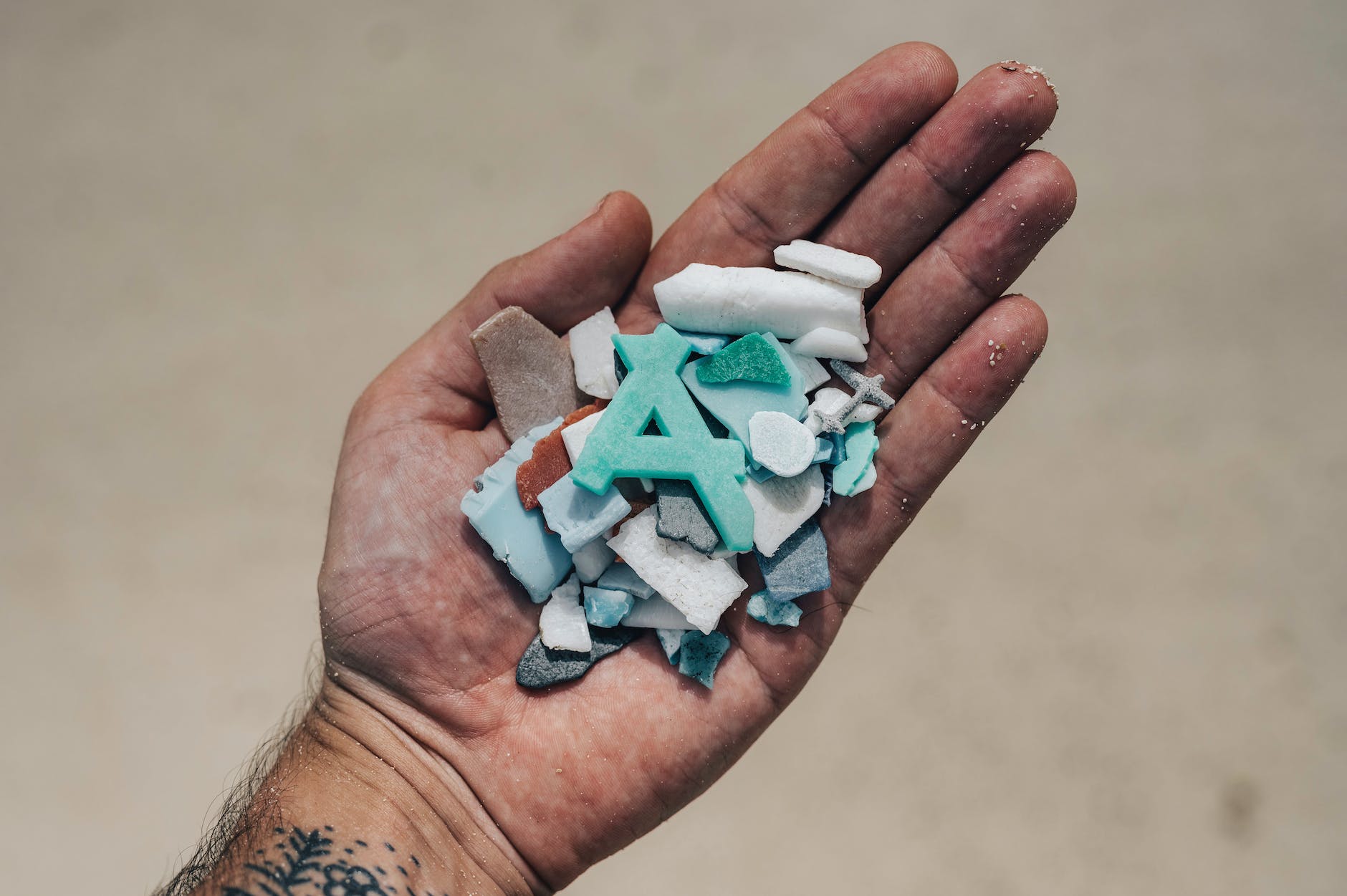 Chaired by Zia Glasenhart (AT)

Hi, my name is Zia and I’ll be your chair for this amazing session! I’m currently in my last year of a higher technical college with a focus on Cyber Security. I love cryptography, photography, reading and volleyball – also do you wanna know a little fun fact about me? I absolutely adore coffee and probably by now have more coffee in my body than blood (which is why my best friend refuses to give me some when I’m staying at her place xd)

I joined EYP around two years ago and absolutely love it, which is why  I hope that you’ll love it just as much and leave the session with a smile on your face, many new friends and amazing memories <3

Microplastics can enter our body when inhaled, absorbed through the skin and of course ingested with water and food. The World Health Organisation (WHO) and the environmental non-governmental organisation (NGO) World Wide Fund for Nature (WWF) have both stated that there is clear evidence of health risks. Microplastics can lead to serious health hazards as they contain  harmful additives, some of which are associated with cancer or endocrine disruption1. Furthermore, they can pose a serious threat to animals’ health due to the microplastics entering their digestive systems and respiratory tracts leading to consequences ranging from impaired reproduction to death. However, both organisations agree that the long-term effects are not fully understood yet.

Figure 2: Release and fates of microplastic fibres from textiles

EU citizens, while being exposed to the health hazards of microplastics, are also partially contributing to the problem by choosing not to recycle and purchasing products containing microplastics, such as cosmetics, paint, and clothes made from synthetic textiles. Some of their choices seem to stem from carelessness and negligence, meanwhile others from the lack of awareness of the problem. However, it is not solely their fault, since over the years a system has been established in which everyday products are manufactured in industries that release and produce a lot of microplastics.

Most of the Member States have so far failed to put in place the laws and regulations concerning microplastics, let alone act upon them. Thus, governments fail to address the issue of microplastic pollution at its core, exposing citizens to health hazards and endangering industries that rely on clean bodies of water such as the fishing industry. Considering that the sewage systems are usually state-owned or subsidised by the governments, they have the legal competence to take action in these sectors.

Various companies and manufacturers are also perpetuating the problem. From fast fashion clothing brands that produce low-quality synthetic items that are quickly disposed of to cosmetics brands that use microplastics in their products, they all contribute to the microplastic burden on the waterways.

The European Environmental Agency (EEA), an agency of the European Union that is responsible for providing independent scientific information on the environment, published a report earlier this year outlining the dangers of microplastics.

Some microplastics can be harmful due to the toxic nature of the contaminants that accumulate on plastic particles2. A recent study has found that an average person ingests around 5 grams of microplastics per week, which is equivalent to one credit card by weight. Some of the earlier-mentioned chemicals are not only associated with cancer, but also with mutations to DNA or endocrine disruption. These endocrine-disrupting chemicals interfere with the endocrine system and therefore affect the functioning of organs. However, up to today there have been very little studies made on the hazardous effects microplastics have on the human body. This has led to various institutions having different views on the topic, but agreeing that more research needs to be done.

2  For example, these contaminants include polychlorinated biphenyls (PCB’s), polycyclic aromatic hydrocarbons (PAH’s), organochlorine pesticides, trace metals or pathogens at high concentrations that leak from plastic particles as they decompose. 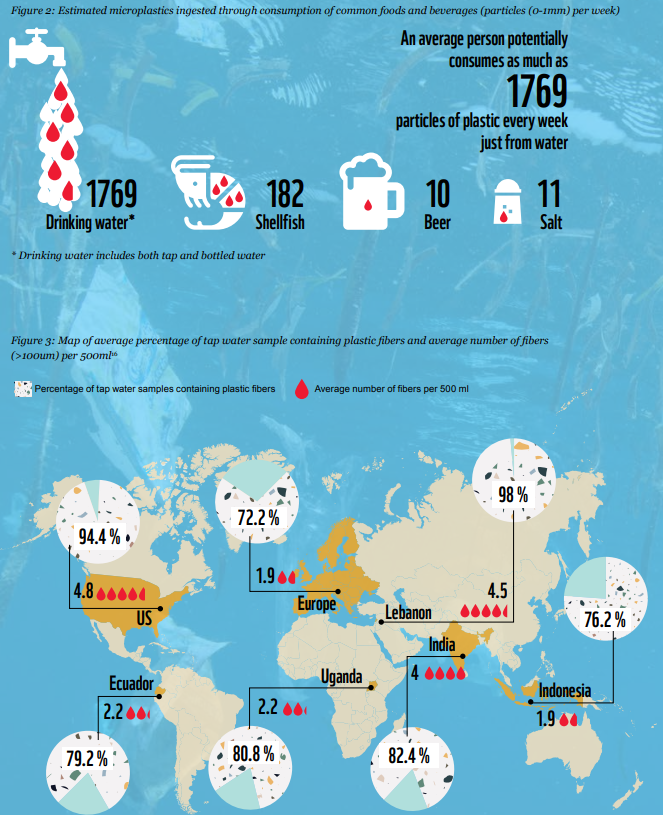 Animals that have ingested microplastics and the  toxins that go with them have been shown to have damaged reproduction and compromised immune systems. It has also been observed that animals become entangled in plastic that is dumped into the sea, which can lead to serious injury or even death, before they later erode to microplastics. If for example a microplastic is ingested, it can block the gastrointestinal tracts, which leads to the animal losing their sense of hunger. Research, in which 50 different kinds of marine animals were examined, pointed out that every single one contained microplastic. However, researchers also agree that the impact of microplastics on animals’ health has not been fully researched and too little is known. Furthermore, researchers have stated that plastic is not the root of the problem, but that we got used to the single-use lifestyle that has been formed over the last decades.

Moreover, when farmers use sewage sludge to fertilise crops, microplastics are released into the environment and the microplastics can therefore end up in the food chain. Furthermore, it has been shown that wastewater-treatment plants are unable to remove microplastics completely, which leads to them polluting rivers, lakes, and the ocean. However, some papers indicated that the true effects of microplastics in our environment have not been proven yet. While there are clear indicators that some contain toxins, they also state that some are ‘mismatched’ in the sense of microplastics measured in the environment to those tested for effects in the laboratory.

Lack of incentives in the industry

Fast fashion, due to its low quality,  wears off quickly, which leads to it being thrown away and over time turning into secondary microplastics. Furthermore, fast fashion is comparatively cheap, since its production often includes exploitation and mistreatment of the workers, which leads to more people buying at its cheap price.

In 2018, the European Commission adopted the Plastics Strategy, which aims to make recycling profitable for businesses by taking further measures on single-use plastics products and the release of microplastics into the environment and spurring innovation and investment in plastic recycling.

Furthermore, the European Chemicals Agency (ECHA) proposed in 2019 to restrict intentionally added microplastics in products, like cosmetics or fertilisers, which are subsequently released into the environment. However, the proposal has not yet been passed.

In 2020, the Circular Economy Action Plan, which is a vital part of the European Green Deal, was adopted by the European Commission. It produced economic incentives to produce more reparable, recyclable and biodegradable product designs. Doing so creates guidance on better plastic waste management and intensified monitoring of each country’s progress. Furthermore, it allocated funds for more research on the harm of microplastic pollution.

Furthermore, the Chemicals strategy was adopted by the European Commission in 2020, which enforces the phase-out of harmful substances such as per- and polyfluoroalkyl substances (PFAS)3 being added into cosmetics and plastic food packaging and boosted the innovative capacity for safer and more sustainable materials.

In 2021, the Directive on Single-Use Plastics came into effect. It states that if sustainable and affordable plastics are available, single-use plastics cannot be sold. Examples include cotton bud sticks, food containers, plastic bags, and cutlery. Furthermore, it applies to all products that are made out of oxo-degradable plastic4.

Also in 2021, the Zero Pollution Action Plan was introduced, which promises to reduce plastic litter at sea by 50% and microplastics that are released into the environment by 30% by 2050. It is aimed to be achieved by strengthening economic leadership and monitoring the microplastic waste situation.

3Per- and polyfluoroalkyl substances (PFAS) are man-made chemicals, currently including 4700 substances, that are  widely used in industry and consumer products and remain in the environment for a long time

4 Oxo-degradable plastics are made from plastics plus certain additives, to mimic biodegradation. However, they are just facilitating fragmentation of the materials, leading to not completely degrading but breaking down into small fragments instead

Microplastics All Around Us, TED talk about the dangers of microplastics, 2022, by Dr. Jesse Meiler